This week, the European Footwear Confederation (CEC) hosted the sixth edition of the International Footwear Forum (IFF). Launched in 2014 during the World Footwear Congress in Mexico, the IFF aims at sustaining a regular and structured dialogue where delegates from worldwide footwear associations and chambers can openly discuss the experiences faced by their companies and their dialogue with their national administrations, as well as identify joint initiatives and promote international cooperation. The event this year was once more held online due to the Covid-19 restrictions still impacting several areas of the globe. Nevertheless, the attendance met the expectations and representatives from 25 countries around the world exchanged views on the current state of global footwear trade. 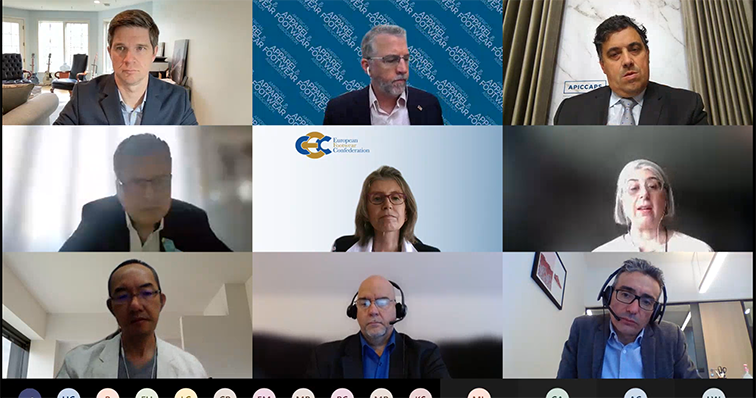 The event, co-organised this year with the American Apparel & Footwear Association (AAFA) and the Footwear Distributors & Retailers of America (FDRA), could not avoid addressing the historical period we are living in and the impact on the industry and the supply chain. The welcome message by CEC Secretary General Carmen Arias, on behalf of CEC President Luis Onofre, referred to the “rollercoaster” that the industry has been experiencing since 2020 due to both the Covid-19 waves and, more recently, the terrifying Russian invasion of Ukraine: a rollercoaster that is being overcome with a strong proof of resilience from footwear companies. Matt Priest, FDRA President & CEO and moderator of the Forum, echoed the CEC words by emphasising how the sector proved to be resilient, agile and innovative during these difficult times and stressed the importance of maintaining a global network to regularly meet, discuss and build common pathways. The key note speaker, Sushan Demirjian, Acting Assistant for SMEs, Market Access and Industrial Competitiveness at the Office of the U.S. Trade Representative, illustrated the future steps of President Biden’s trade policy and its impact on the footwear industry, while Gary Raines, Chief Economist at FDRA, presented an in-depth economic review of the global footwear trends. After these interventions, during the open discussion the delegates focused also on sustainability and technology, themes of utmost importance shaping not only the future of our sector but also the global political agenda.

What emerged from the IFF, as highlighted in the final remarks by Steven Lamar, AAFA President & CEO, is that we are all on the same side and we should reinforce our cooperation in a period of radical change for the industry. The meeting ended with the commitment from the participants to engage in the identification of topics of common interest and to meet more regularly.